Problems raised include failure to pay bills and file reports 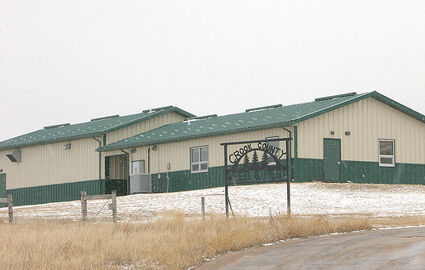 The annual county audit raised issues within the Crook County Weed & Pest District financials that were described as a "near complete breakdown" within the accounting system.

This article has been corrected for clarification.

This year's county audit flagged a serious issue within the Crook County Weed & Pest District that led to a "near complete breakdown in the accounting process". The list of errors presented included failures to pay bills or file reports and "general disorder" within the administrator's office and accounting system.

Paul Stille of Leo Riley & Associates presented his annual findings to the county commissioners last week, commenting that, "Weed & Pest has had some challenges due to some turnover and some other things that we're trying to work our way through."

Wade Dennis, Weed & Pest District Board Chairman, is working diligently to get the finances straightened out, Stille said, and a new member of staff has been hired accordingly.

He suggested that the problems may have come about because the person responsible for the finances was in "a little over his head."

Within the audit, Stille described "significant operational deficiencies" that he attributed to, "the loss of personnel with the skills, knowledge and experience necessary to do the daily bookkeeping properly and the board's reluctance to...recognize the situation and take immediate action".

A lengthy list of issues began with reports not being filed in a timely manner, including sales tax, payroll tax and Wyoming Retirement reports, "despite repeated notices alerting the district to the problem".

Remittances for sales and payroll tax and Wyoming Retirement and vendor payments also did not occur in a timely manner, despite repeated demands for payment, and "significant penalties" were incurred.

According to the audit report, district customers were not billed for services, resulting in a "significant dollar amount" not being collected for services that had been rendered months before.

A number of customer invoices also included sales tax on labor, which is not taxable under state statute.

"This error exaggerated the liability due, which required amended returns to be filed," states the audit report. "In addition, a significant number of credit memos needed to be sent out to customers who had been erroneously billed for sales tax."

Stille also notes in the audit report that payments had not been deposited.

Vouchers and invoices were not presented to the auditors when requested, some of which were presumed lost. Disbursements and payroll checks were not entered into the general ledger program, a problem that was compounded by the fact that two sets of books were being maintained.

This second issue, according to the report, occurred when the district hired a contract bookkeeper to assist. The contract bookkeeper used a different version of the accounting software, which resulted in two sets of books, neither of which contained a complete set of data.

Finally, the audit report notes the purchase of capital assets without approval from the board. Specifically, the administrator purchased a new vehicle without permission.

"This vehicle was subsequently returned to the vendor when the board discovered the purchase," states the report.

Stille made a number of recommendations to overcome these problems, starting with the suggestion that the board of directors should carefully evaluate the skills, knowledge and experience of the people it hires to run the district.

"If employees appear to be struggling or they are not meeting expectations, then immediate actions needs to be taken to ensure that the situation does not deteriorate," he states in the report.

Such action would include unannounced site inspections and requesting information not normally provided at board meetings to gauge compliance with operating procedures.

"Alternatively, the board could hire a local accountant to periodically look at the general ledger to see if the bookkeeping is being performed in a timely manner," the report states.

"We also recommend that the board have access to the district's email account and to check periodically to see that there are no unanswered messages demanding access."

The board of directors responded to the audit findings with a statement that it will be more involved in the daily affairs of the district in future.

"The board will be more sensitive to situations where work is not being done in a timely manner, or when requests for information go unfulfilled," states the board's response.

"In addition, the board will review the qualifications of employees and the demands of the job to ensure that employees have the skills, knowledge and experience to perform their duties; and if not, then provide them with training or assistance."

Stille told the commissioners that he has been in "constant communication" with the board since the situation came to light and his firm has been doing its best to assist with straightening out the books.

However, he said, the firm is, "Walking a tightrope on it a little bit. We're trying to help, my problem is that I can't audit my own work."

Stille said that safeguards have been put in place for this reason. In particular, he has taken care not to make any management decisions, such as who the district hires, how they are paid or which bills to pay. Stille and his firm were very involved in the process during December and January, he said, but have turned everything over to the new employee at this time.

Still told the commission that it is not possible to tell if any of the district's funds have been misappropriated, as most of what occurred was outside the audit period. Bills were easy to prove by looking at what has been paid out of the bank account, he said, but disorganization within the district office made it impossible to find some of those bills.

Stille recommended that the commissioners "pay some special attention" to the district's financials next year.