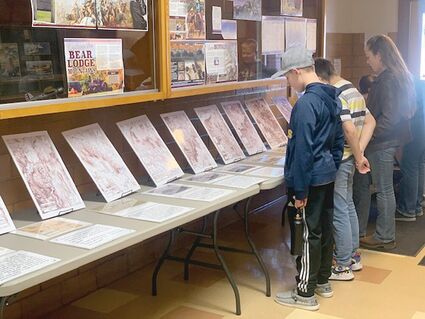 People were able to view photos from the traveling exhibit.

The Hulett Museum in conjunction with the Hulett Library held an afternoon program at the GHCC last Thursday going over and discussing the traveling exhibit which started Jan. 20. Mike Madler presented the talk and exhibit information.

The "Miles City to Deadwood Stage" exhibit is a traveling display sponsored by the O'Fallon Historical Museum. The trail was one of the lesser-known routes to the Black Hills.

The route was covered by two stage companies. The exhibit depicts the original route between Miles Town, Montana

Territory and Deadwood, Dakota Territory with photos and