Jean Marie Ericsson, age 86 of Alzada, Montana, passed away Sunday, October 9, 2022, at Belle Estate. She was loved dearly by her family and will be greatly missed.

A memorial service will be held at 1 p.m., followed by an open house reception until 3 p.m. on Thursday, October 13, 2022 at Leverington Funeral Home of the Northern Hills in Belle Fourche, South Dakota.

Jean Marie Hodge was born July 4, 1936, on a ranch near Reva, South Dakota. She was the daughter of Ruth (Haka) Hodge and Leonard Hodge, who owned and ran Hodge Bootery in Belle Fourche during the 1940s to 1970s.

The Hodges moved to Belle Fourche when Jean was nine, where she lived on the same block as the boy she would later marry. Jean had several siblings – Dan Hodge (deceased), Sharon Hodge Crabbe (deceased), Peggy Hodge Larrabee Moore (deceased) and Virginia Hodge Gillette (deceased); she is survived by her brother Steve Hodge (Zona), her sister-in-law Susan Hodge and her husband Ronald Ericsson.

Jean attended school in Belle Fourche, where she met and later married Ronald in 1956. Both Jean and Ron went to college in Fort Collins, Colorado, at Colorado A&M University (now Colorado State University).

Ron went on to pursue his PhD and work as a scientist, while Jean raised their two children, Julie Anderson (Gary) and Scott Ericsson (Patricia). Ron's career took Jean and their family all over the world for work assignments, living in Germany, Iran, Michigan, Marin County, California, Wisconsin, Idaho and Kentucky.

Jean adored her children; she enjoyed sewing, cooking, teaching life skills and self-sufficiency to her daughter Julie and son Scott. Jean was a wonderful mother and homemaker and made many friends on her travels – some of whom she kept in touch with for the rest of her life.

Eventually, Jean and Ron settled on their ranch outside of Alzada in the northeastern corner of Wyoming. At the Wyoming ranch house Jean would host her grandchildren, Marie (Andres) Ericsson, Spencer (Brie) Ericsson and William Anderson during summer vacations.

She would cook, garden, play games, do crafts, collect fossils, enjoy nature walks, go camping and take them to the rodeo and Fourth of July parade as well as to visit family in Belle Fourche. Family was very important to Jean, and she took great care of hers.

She was tireless, an industrious worker, she painted many paintings and was a renown cook. She had a beautiful singing voice, dressed impeccably and was a kind and gracious host.

She loved to visit thrift stores and crocheted many afghans. She was always prepared and willing to help someone in need and offered kind words freely.

Jean and Ron brought their grandchildren on many travels to national and state parks, historical sites and international trips – experiences which her grandchildren will forever cherish. In later years, Jean and Ron began spending winters down in Alpine, Texas, where she was closer to her son Scott and his family. 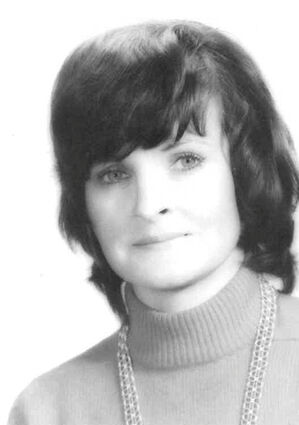 Jean made a second home of the Texas ranch house, where she continued to care for her husband and family. She enjoyed watching the Texas wildlife, being with her little dog Coco and living in closer proximity to town amenities.

Jean is survived by two great grandsons, Weston and Quentin, who she did not get to meet, but who will be raised with her recipes, pictures and stories. Jean will indefinitely be remembered with the utmost respect and admiration by all who encountered her.

Her love for her family and steadfast work ethic were pure. Her family will miss her the most and will honor her memory by living by the strong values, kindness and decency that Jean instilled by example.

She will be sorely missed by both of her children; may her memory be eternal.