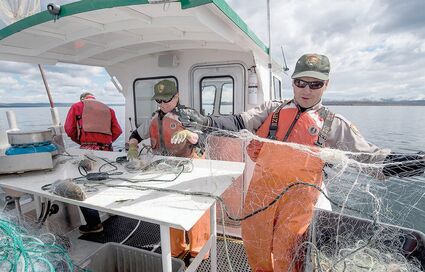 The process of removing the invasive species has cost tens of millions, while labor-intensive methods have evolved. As the park makes headway mitigating the effects of lake trout, two more species have recently caused concern in the fight to protect Yellowstone Cutthroat trout.

Tuesday evening, the East Yellowstone chapter of Trout Unlimited invited Yellowstone fisheries biologist Phil Doepke to speak to the group during a public meeting at the Park County Library in Cody.

The organization has donated to the battle to rid the lake of the invasive species, and members have volunteered to work on gill-netting boats in an effort to understand what the park faces in the battle.

"At the end of those two days, my fingers were just in tatters. I don't know how these guys do it day after day after day," said chapter member David Sweet.

This ongoing project has earned national attention and is now listed as a top priority national project by Trout Unlimited.

Sweet was inducted into the Wyoming Outdoor Hall of Fame in 2014.

The park has been aggressively gill-netting, laying about 6,000 miles of nets per year on the bottom of the largest high-elevation lake in North America, which averages a depth of 140 feet.

From ice out in May until the docks start freezing over in October, scientists and fishermen, which Doepke called "fish geeks," have sought to crash the lake trout population, which feeds on the native cutthroats.

"Lake trout are a wonderful fish. They're just in the wrong place," Doepke said.

The labor of fisheries biologists and their vast arsenal of equipment is an added expense.

Saving the native species is important, not only for the cutthroats' sake, but for other important species in the ecosystem. Without an abundance of cutthroats, grizzlies turned to feeding on alternative sources.

Osprey have nearly disappeared from the park. The number of osprey nests in the park plummeted from about 50 in the late '80s and early '90s to just "a couple." Eagles have turned to eating other famous bird populations in the park.

"Eagles, they liked the fish, but they're also a scavenging bird," Doepke said. "And what was found is instead of eating fish, they started eating the pelican young and swan cygnets [when the cutthroat population began to rapidly decline]."

Now, as efforts to remove lake trout for the past 20 years have found success, bears and eagles have been observed returning to their traditional spring menu of cutthroats while they move into streams to spawn. The surviving cutthroat populations are now growing larger, which should thrill anglers.

But Doepke said a large portion of the cutthroat population are now too big for osprey, and the charismatic bird species - which dive into water to capture prey - have yet to rebound.

The park sells 40,000 fishing licenses a year. Yellowstone cutthroats can't be harvested, but lake trout are a must-kill species. Doepke said anglers might want to target the southeast corner of the West Thumb region of the lake, where there is a larger population of lakers and anglers won't run into snagging issues with underwater gillnets and fish traps.

Gill-netting has continued since the beginning of the conservation project, but park biologists have also tried several other tactics to crash lake trout populations. In cooperation with some of the anglers fishing Yellowstone, they surgically implanted transmitters into about 200 lake trout, referred to as Judas fish, to track them back to concentrations of the species and their spawning beds.

Then they casted their nets in the area. Unfortunately, netting efforts drove the species away.

So then they tried dumping dead and shredded lake trout on known spawning beds. The practice worked to kill lake trout roe, but it also drew in unwanted bears and they faced running low on resources as lake trout populations plummeted.

"We were catching fewer lake trout, especially a lot fewer large lake trout, so the amount of fish material was getting to be a lot less," said Doepke. "So it was like, OK, this works, but we're going to run out of fish."

In 2019, park biologists designed a carcass analogous pellet. The small pellets are made out of soy and wheat with the same protein content of the fish carcasses. The park had the pellets mass-produced in Twin Falls, Idaho.

The park used a helicopter, making more than 40 flights to apply the same amount of pellets as the concentration of dead fish. The pellets are effective at causing 100% mortality on spawning beds.

A single female cisco, a type of whitefish native to the Great Lakes, was caught in Yellowstone Lake. The species is hard to catch, Doepke said, and he suspects more illegal bucket biology is in play.

They tested the specimen, surgically removing a tiny calcium carbonate structure in the inner ear called otoliths. It appears the female hatched in the lake, meaning there must be more, despite not finding other evidence to date.

Smallmouth bass were also caught near the park. The bass are an invasive predatory species that will threaten wild and native trout populations if they become established in the upper Yellowstone River.

"Since anglers are highly effective at suppressing invasive fish in waters where they coexist with native species such as cutthroat trout, they will be required to kill and report any smallmouth bass caught in Yellowstone National Park when the fishing season opens Memorial Day weekend," said Yellowstone's Lead Fisheries Biologist, Todd Koel.

Additionally, Yellowstone National Park and USGS biologists will be sampling the Gardner and Yellowstone rivers upstream of where the invasive smallmouth bass was caught.

Over the next few weeks, biologists will monitor these rivers closely to gauge the possible extent of the invasion.

"Our goal is to protect native fish populations and natural ecosystems. We will do everything in our power to prevent the establishment of smallmouth bass in the park and prevent them from preying on and displacing trout and other native fish," Koel said.

Doepke has worked in the conservation project his entire career at Yellowstone, but this is his last season, as he plans to retire before the end of the year.

"It's been a wonderful job and I've really enjoyed working in Yellowstone National Park," he said. "One of the great things about my job is I have essentially five, six seasonal technicians and a couple of interns every year. These are all young fisheries professionals, and they're all looking for jobs. They want to do what I'm doing. They want to work as a technician. They want to get their graduate degree, and then they want to become a fishery biologist."